You can find on this page the blank map of Spain to print and to download in PDF. The contours map of Spain presents the international boundary of Spain in Europe. You can use the vector map of Spain for personal or educational use.
Spain is a country located on the Iberian Peninsula in South Western Europe. It is situated in both Northern and Eastern hemispheres of the Earth as its shown in Spain blank map. 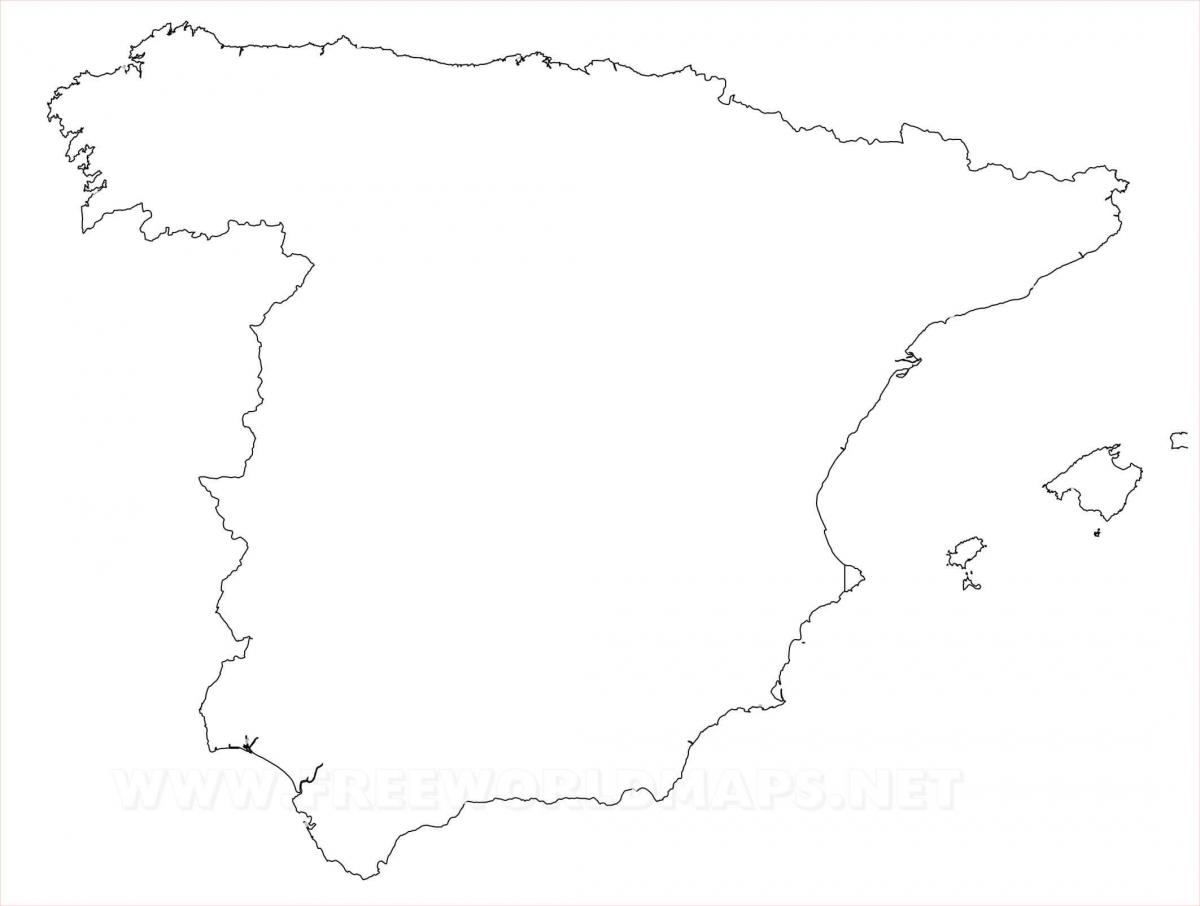 Spain is one of the oldest countries in Europe, located on the beautiful Iberian Peninsula as its mentioned in Spain blank map. Spain is also one of the most populous countries in Europe with around 46 million people. Spain is a country with a low and flat coastal plain around its vast coastline surrounded by the Mediterranean Sea and the Atlantic Ocean. The Balearic Islands lie roughly 80 km/ 50 miles of Spain easter coastline in the Mediterranean Sea. The four islands belonging to the Islas Baleares (Balearic Islands) are: Mallorca, Menorce, Ibiza,Formentera.

Like many other European countries, what we know as modern-day Spain was once a collection of individual kingdoms. That changed in the 15th century when Fernando of Aragon and Isabel of Castile married and united their respective kingdoms. The interior of Spain is a rugged mix of hilly regions and tall mountain ranges as you can in Spain blank map. Spain is also a very urbanized county, with almost 80% of the population living in urban areas, while the remaining 20% of the country live in the rural parts of Spain. 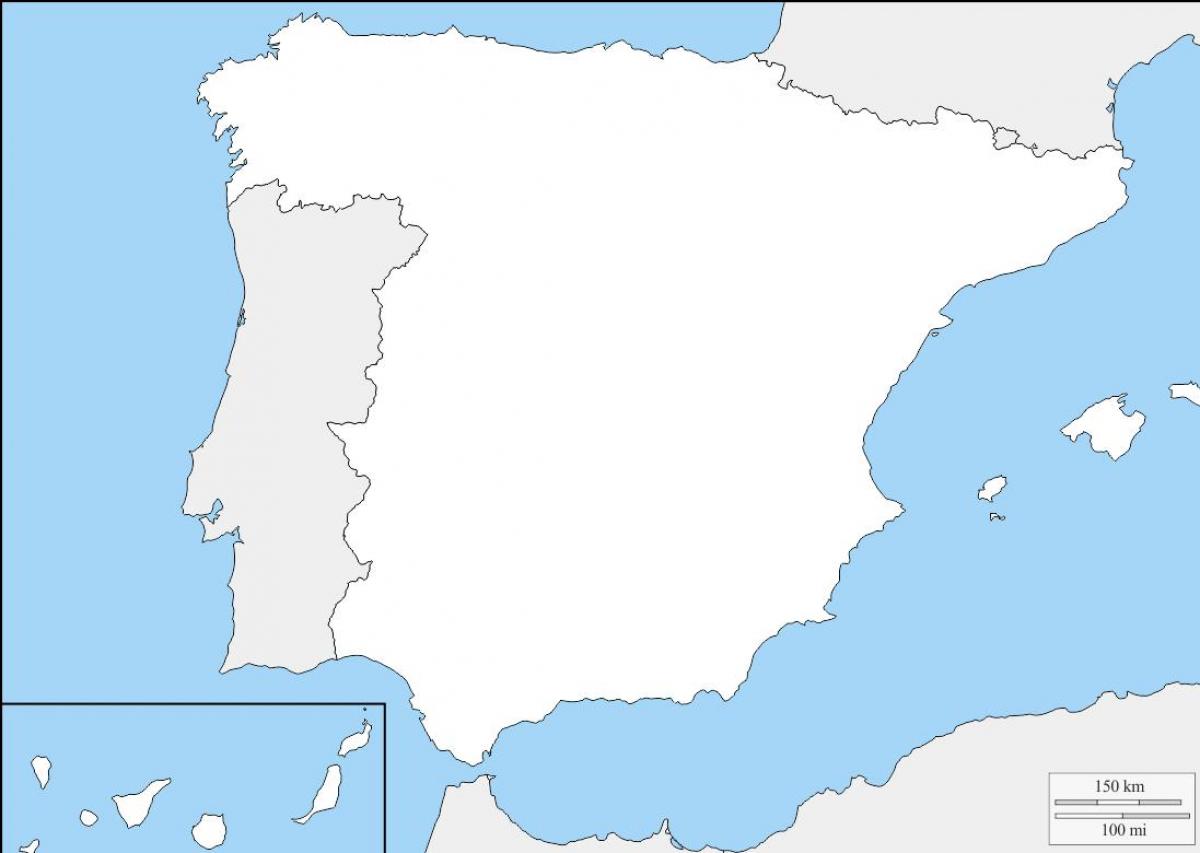 The Spain map outline shows all the contours and international boundary of Spain. This outline map of Spain will allow you to easily learn about neighboring countries of Spain in Europe. The Spain contours map is downloadable in PDF, printable and free.

The Spanish mainland is bordered to the south and east almost entirely by the Mediterranean Sea (except for a small land boundary with Gibraltar); to the north by France, Andorra, and the Bay of Biscay; and to the west by the Atlantic Ocean and Portugal as its mentioned in Spain map outlines. The country also shares maritime borders with Algeria and Italy.

Most of Spain boundaries are water as you can see in Spain map outlines: the Mediterranean Sea on the south to the French border and the Atlantic Ocean on the northwest and southwest (in the south as the Golfo de Cádiz and in the north as the Bay of Biscay). Spain also shares land boundaries with France and Andorra along the Pyrenees in the northeast, with Portugal on the west, and with the small British Overseas Territory of Gibraltar near the southernmost tip.

The above blank outline map is of the European country of Spain, a country in South Western Europe well-known for its unique and vibrant Spanish culture. The map maybe downloaded and printed to be used for coloring or educational purpose. It can be used for your creative projects or simply as a decoration for your design & website content. 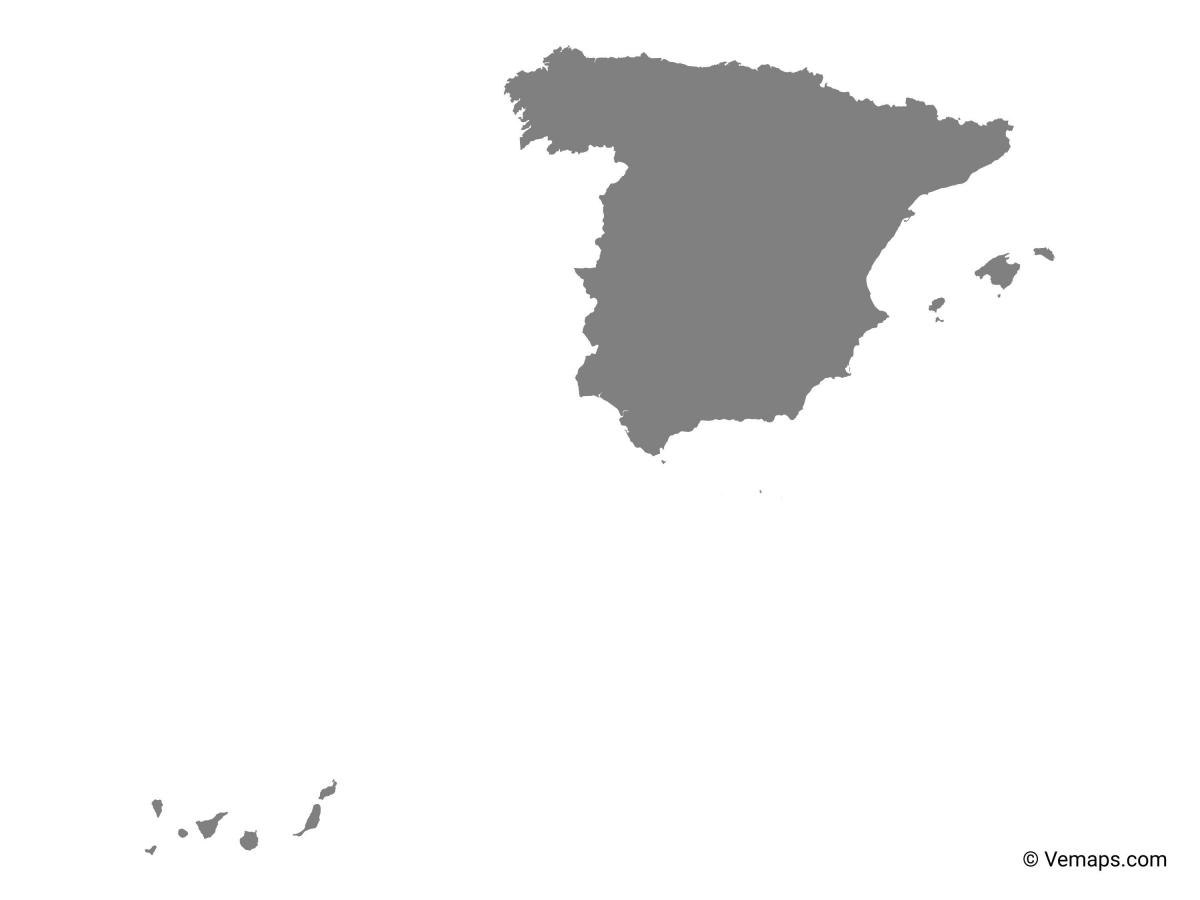 Spain also includes the Balearic Islands in the Mediterranean Sea, the Canary Islands in the Atlantic Ocean and a number of uninhabited islands on the Mediterranean side of the Strait of Gibraltar, known as Plazas de soberanía, such as the Chafarine islands, the isle of Alborán, Alhucemas, and the tiny Isla Perejil as its shown in Spain map vector. The little Pheasant Island in the River Bidasoa is a Spanish-French condominium.

Strategic location along approaches to Strait of Gibraltar; Spain controls a number of territories in northern Morocco including the enclaves of Ceuta and Melilla, and the islands of Penon de Velez de la Gomera, Penon de Alhucemas, and Islas Chafarinas; Spain Canary Islands are one of four North Atlantic archipelagos that make up Macaronesia; the others are Azores (Portugal), Madeira (Portugal), and Cabo Verde as its shown in Spain map vector.

Spain is one of the two countries situated on the Iberian Peninsula. Spain has a coastline along the Atlantic Ocean to the north and the Mediterranean Sea to the southeast as its mentioned in Spain map vector. Spain is known for its food, Flamenco music and dance, siesta, bullfights, horses, arts and literature, architecture, a Moorish heritage, its islands, Mediterranean beaches, wines, fruits and vegetables, and football (soccer).