You can find on this page the Spain wine map to print and to download in PDF. The Spain wine regions map presents the vineyards and wine growing areas of Spain in Europe.
The vineyards of Spain spread accross 967 000 hectares with an appellation system described as its shown in Spain wine map. According to OIV (International Organisation of Vine and Wine), Spain was the thrid biggest wine producer in the world in 2017 after Italy and France. 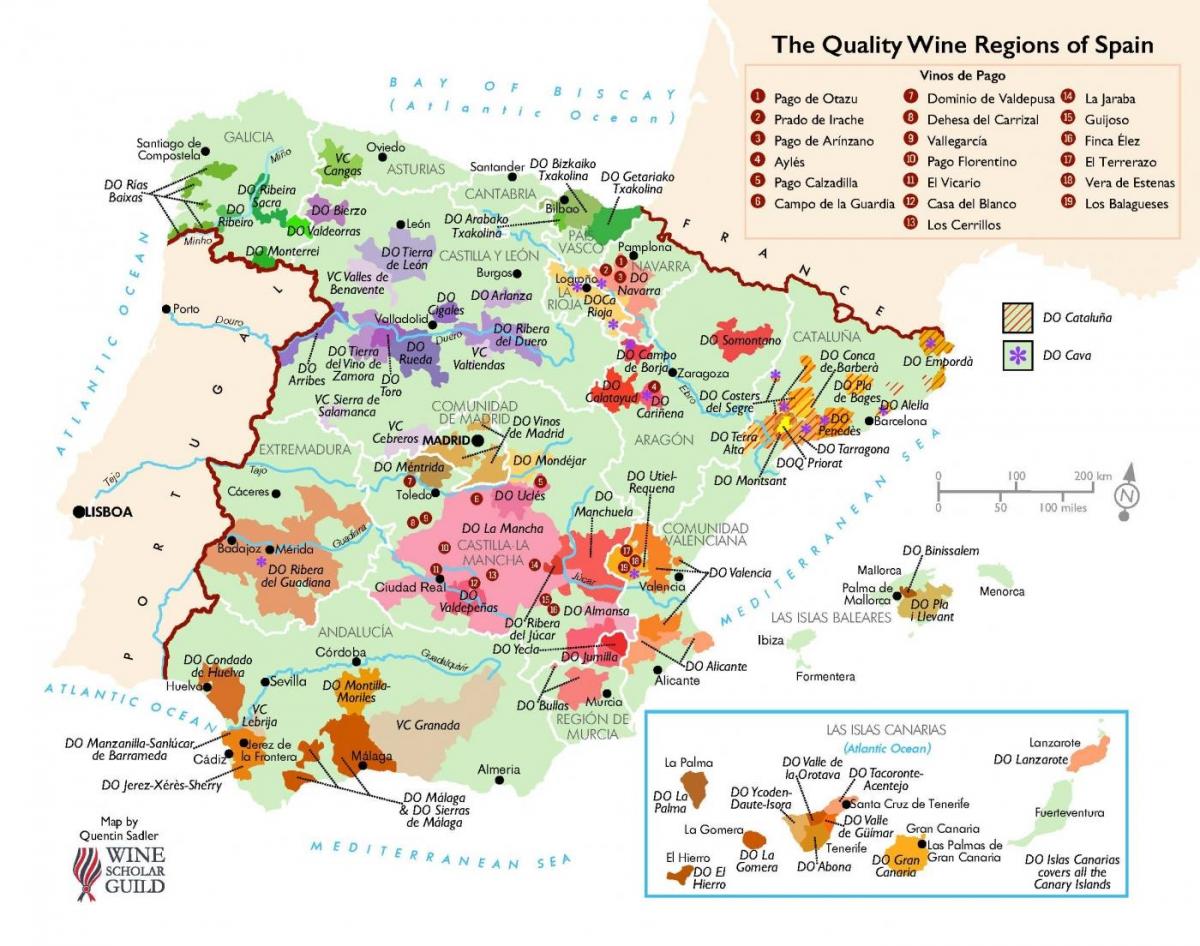 The Spain wine map shows all wine growing areas of Spain. This wine regions map of Spain will allow you to easily localize all appellations and main grape varieties in Spain in Europe. The Spain vineyards map is downloadable in PDF, printable and free.

There are 69 officially recognised wine regions in Spain as its mentioned in Spain wine map. The mainstream areas are referred to as Denominaciones de Origen D.O, which are similar to France appellations, and the wine produced here is carefully regulated for quality according to specific laws. With extremely varying climates, terroir and wine making traditions throughout the country, every wine region has something different to offer – from the warm red wines of Rioja to the sparkling Cava from Penedes.

Northwest Spain, this area of the Spanish wine regions map, which is also known as ‘Green Spain’ courtesy of the cool, misty climate that creates lush pastures and forests. Albarino is the dominate grape grown along the coast or the rivers of Rias Baixas (lower fjords) as you can see in Spain wine map, which produces a variety of crisp, aromatic white wines. Moving inland, away from the coast towards Bierzo and Ribiera Sacra, brings red grape varieties with Mencia arguably the north west best. The Duero River Valley as you can see in Spain wine map is the birthplace to some of the country finest red wines, and home to Spain most renowned winery, Vega Sicilia. This region, which forms part of the border between Spain and Portugal is fuelled by Tempranillo the most planted grape across the country producing bold red wines from Toro, Ribera del Duero and Leon.

Ebro River Valley envelopes the most recognisable appellation on any map of Spain wine regions, La Rioja, which has traditionally claimed the title of the country most prestigious wine producer. Tempranillo remains dominate here, but Grenache, Mazuelo and Graciano are generating new styles in the area. Located in the south west of the Spanish wine regions map, Andalusia is a notably hot and dry area that is famous for its variety of fortified and dessert wines, commonly known as Sherry. Mediterranean Coast, this warm, coastal area on the Spain wine map envelopes the sub-regions of Valencia, Murcia and Catalonia. The latter has the most internationally acclaimed reputation for quality wines, including world class reds from Priorat and Montsant.