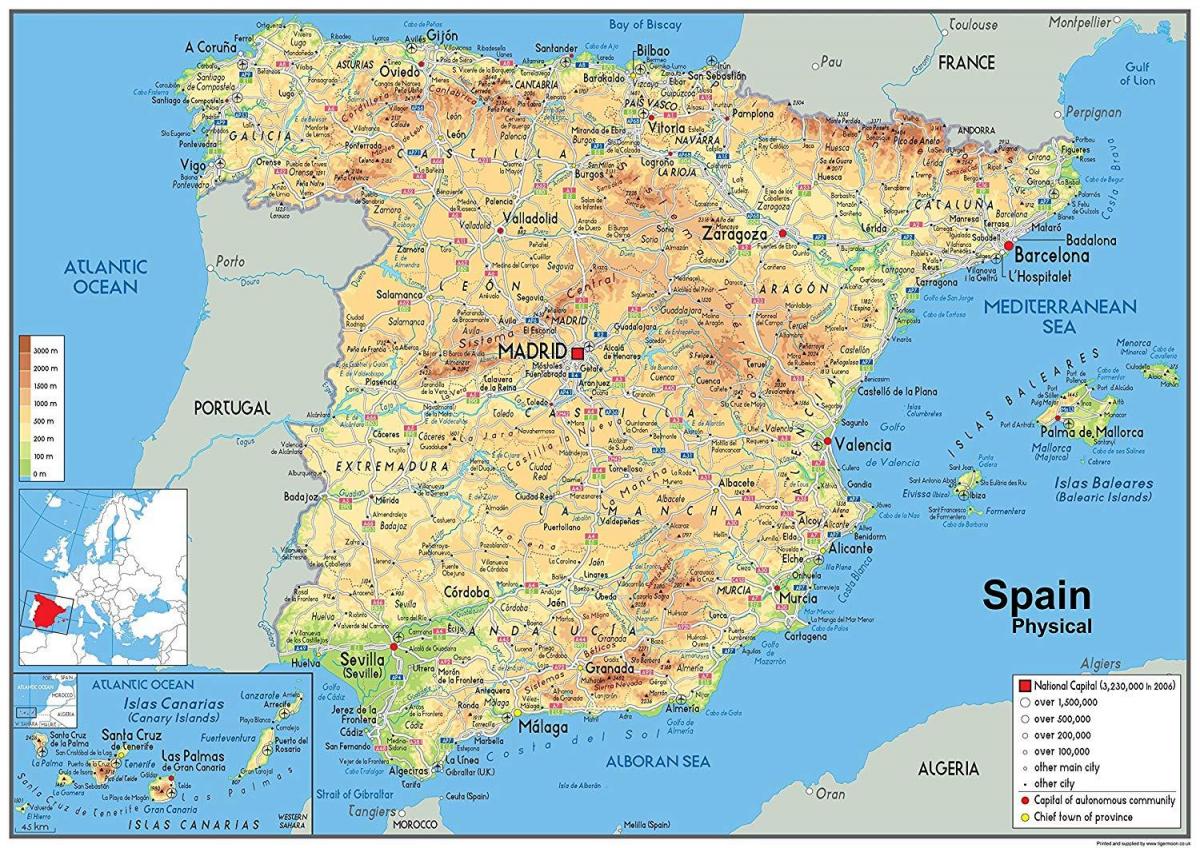 The interior of Spain is a high, dry plateau surrounded and crisscrossed by mountain ranges as you can see in Spain physical map. Rivers run to the coasts, creating good farmland. Still, the interior of the country gets very hot in summer and very cold and dry in the winter. Droughts are common. Spain has a little over 3,000 square miles of physical coastline, which is dotted with bays, cliffs, and beaches. One of the bays, the Bay of Biscay, is known for its difficult weather and rough waters. The bay is located in northern Spain and is shared with the country of France. To the south of Spain is the Strait of Gibraltar, which separates the country from North Africa.

The physical geography of Spain is varied. Spain is located mostly on the Iberian Peninsula, along with neighboring Portugal. The other countries and territories that border Spain are France, Andorra, and Gibraltar (the latter of which is claimed by Great Britain). The Mediterranean Sea and the Atlantic Ocean provide the country with natural borders. The Spanish mainland is around 195,124 square miles, and the interior of the country is drier and warmer than the coastal areas. 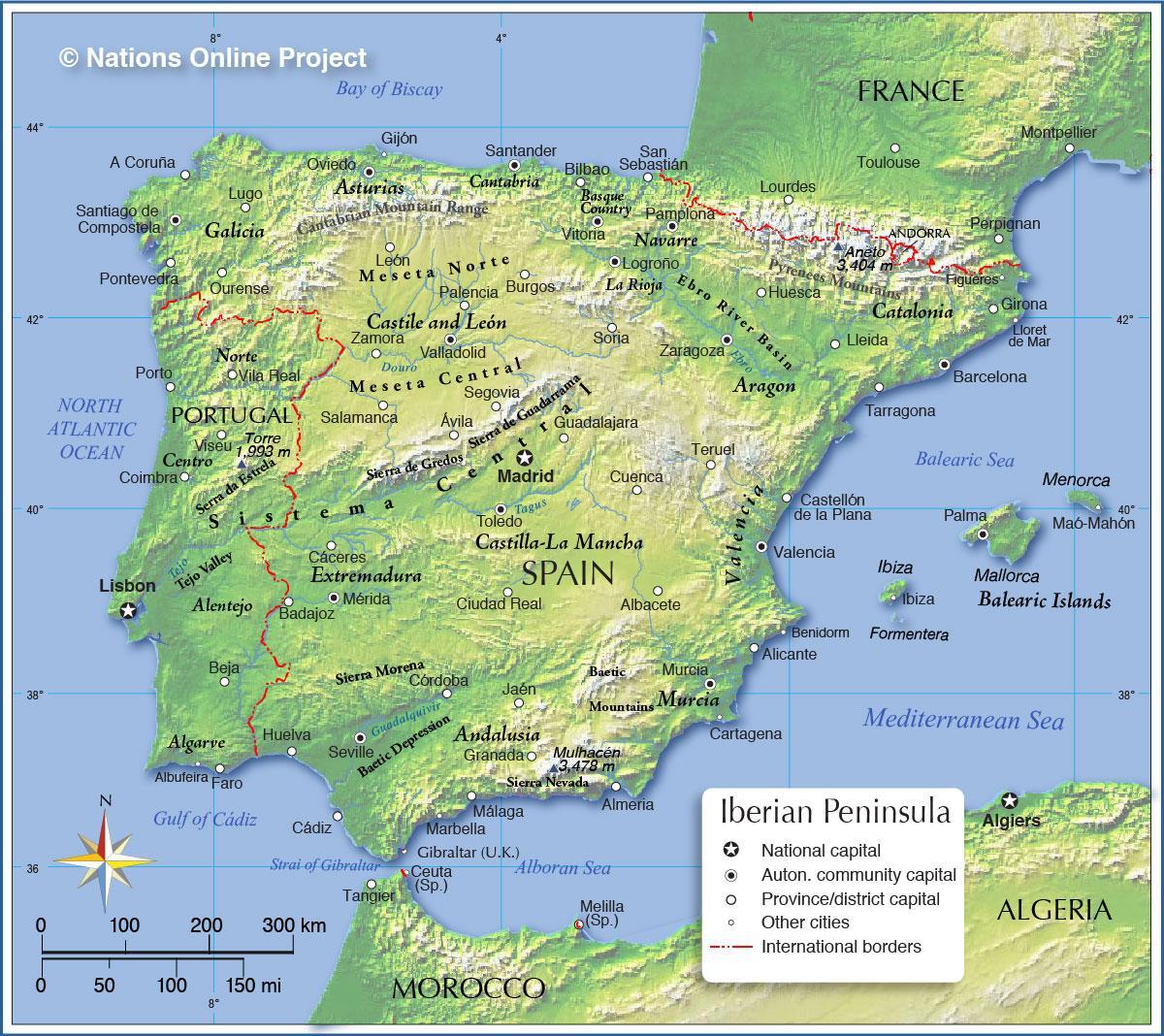 The majority of Spain peninsular region consists of the Meseta Central, a highland plateau rimmed and dissected by mountain ranges as its shown in Spain topographic map. Other landforms include narrow coastal plains and some lowland river valleys, the most prominent of which is the Andalusian Plain in the southwest. The country can be divided into ten natural topographic regions or subregions: the dominant Meseta Central, the Cantabrian Mountains (Cordillera Cantabrica) and the northwest region, the Ibérico region, the Pyrenees, the Penibético region in the southeast, the Andalusian Plain, the Ebro Basin, the coastal plains, the Balearic Islands, and the Canary Islands. These are commonly grouped into four types: the Meseta Central and associated mountains, other mountainous regions, lowland regions, and islands.

The major lowland regions of Spain are the Andalusian Plain in the southwest, the Ebro Basin in the northeast, and the coastal plains as its mentioned in Spain topographic map. The Andalusian Plain is essentially a wide river valley through which the Río Guadalquivir flows. The river broadens out along its course, reaching its widest point at the Golfo de Cadiz. The Andalusian Plain is bounded on the north by the Sierra Morena and on the south by the Sistema Penibético; it to an apex in the east where these two mountain chains meet. The Ebro Basin is formed by the Río Ebro valley, contained by mountains on three sides—the Sistema Ibérico to the south and west, the Pyrenees to the north and east, and their coastal extensions paralleling the shore to the east. Minor low-lying river valleys close to the Portuguese border are located on the Tagus and the Río Guadiana.

The Coastal Plains regions of Spain are narrow strips between the coastal mountains and the seas as you can see in Spain topographic map. They are broadest along the Golfo de Cádiz, where the coastal plain adjoins the Andalusian Plain, and along the southern and central eastern coasts. The narrowest coastal plain runs along the Bay of Biscay, where the Cordillera Cantábrica ends close to shore. The remaining topographic regions of Spain are the Balearic and the Canary Islands, the former located in the Mediterranean Sea and the latter in the Atlantic Ocean. The Balearic Islands, encompassing a total area of 5,000 square kilometers, lie 80 kilometers off Spain central eastern coast. 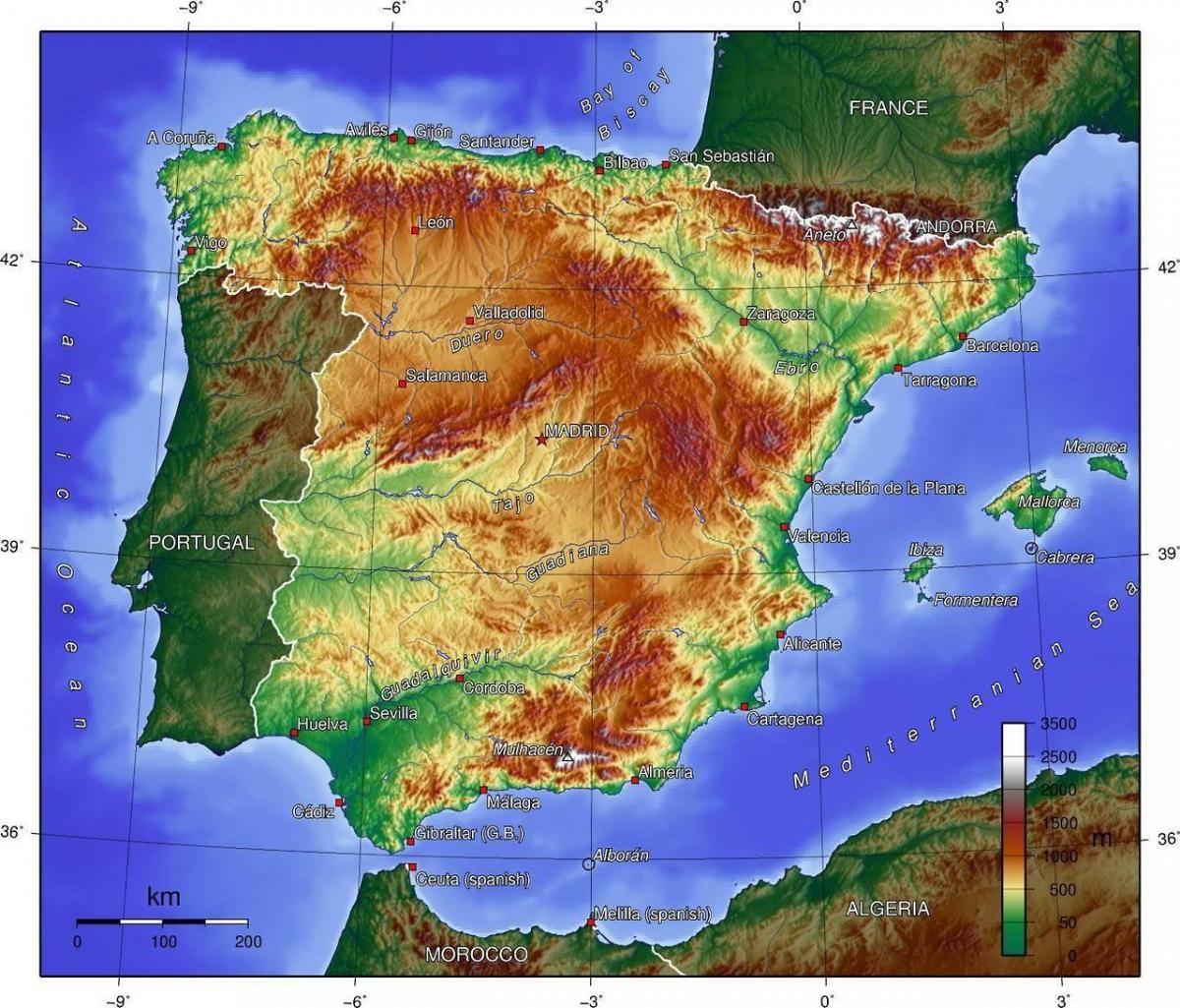 Mount Teide or, in Spanish, Pico del Teide [ˈpiko ðel ˈtejðe] is the highest elevation of Spain and the islands of the Atlantic (it is the third largest volcano in the world from its base) as its shown in Spain elevation map. It is an active volcano which last erupted in 1909 from the El Chinyero vent on the Santiago (northwestern) rift and is located on Tenerife, Canary Islands. At 3718 m above sea level, and approximately 7500 m above the floor of the Atlantic Ocean, Teide is the highest mountain in Spain, highest point in the Atlantic Ocean and the 13th highest mountain in the European Union (highest mountain not in the Alps).

Mulhacén (Spanish pronunciation: [mulaˈθen], Arabic: ملحسن‎) is the highest mountain in continental Spain and in the Iberian Peninsula. It is part of the Sierra Nevada range in the Cordillera Penibética. It is named after Abu l-Hasan Ali, or Muley Hacén as he is known in Spanish, the penultimate Muslim King of Granada in the 15th century who, according to legend, was buried on the summit of the mountain. It is the high elevation point in Spain with 3,478.6 m (11,413 ft) as you can see in Spain elevation map. 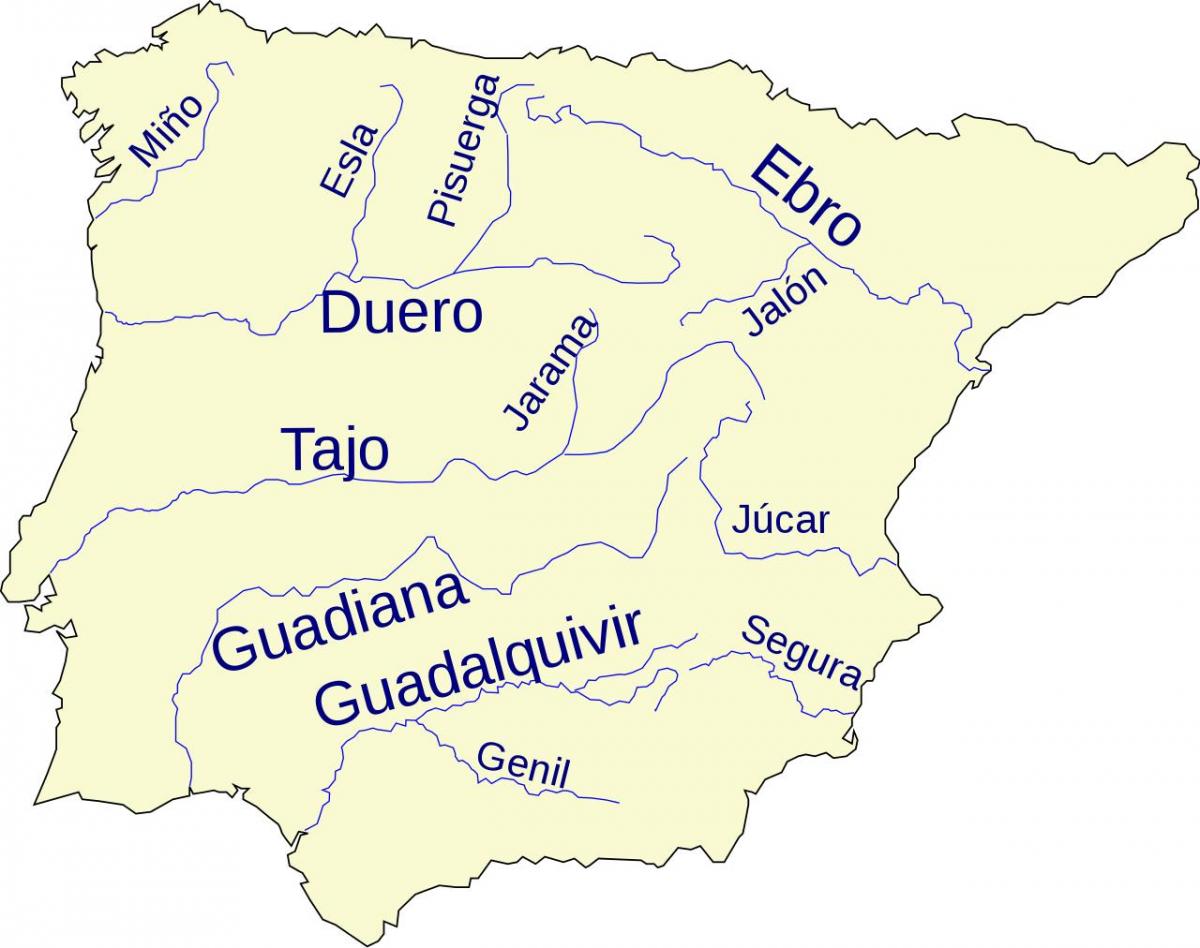 The rivers in Spain map shows the principal rivers with their names of Spain. The rivers map of Spain will allow you to find the main rivers which flow in and through Spain in Europe. The Spain rivers map is downloadable in PDF, printable and free.

The major rivers flowing westward through the Meseta Central include the Duero, the Tagus, the Guadiana, and the Guadalquivir as its shown in Spain rivers map. The Rio Guadalquivir is one of the most significant rivers in Spain because it irrigates a fertile valley, thus creating a rich agricultural area, and because it is navigable inland, making Seville the only inland river port for ocean-going traffic in Spain. The major river in the northwest region is the Miño. El Atazar Dam is a major dam built near Madrid to provide a water supply.

The Tagus is the longest river on the Iberian Peninsula. It is 1,038 km (645 mi) long, 716 km (445 mi) in Spain, 47 km (29 mi) along the border between Portugal and Spain and 275 km (171 mi) in Portugal, where it empties into the Atlantic Ocean near Lisbon as its mentioned in Spain rivers map. The Ebro is Spain most voluminous river. Its source is in Fontibre (Cantabria). It flows through cities such as Miranda de Ebro (Castile and Leon), Logroño (La Rioja), Zaragoza (Aragon), and the Catalan cities of Flix, Tortosa, and Amposta before discharging in a delta on the Mediterranean Sea in the province of Tarragona. The Douro or Duero is one of the major rivers of the Iberian Peninsula, flowing from its source near Duruelo de la Sierra in the province of Soria across northern-central Spain and Portugal to its outlet at Porto. Its total length is 897 km, of which only sections on the Portuguese river are navigable by light rivercraft.

The Guadiana, or Odiana, is an international river located on the Portuguese–Spanish border, separating Extremadura and Andalucia (Spain) from Alentejo and Algarve (Portugal). The river basin extends from the eastern portion of Extremadura to the southern provinces of the Algarve; the river and its tributaries flow from east to west, then south to the border towns of Vila Real de Santo António (Portugal) and Ayamonte (Spain), where it flows into the Gulf of Cádiz as you can see in Spain rivers map. The Guadalquivir is the fifth longest river in the Iberian peninsula and the second longest river with its entire length in Spain. The Guadalquivir is 657 kilometers long and drains an area of about 58,000 square kilometers. 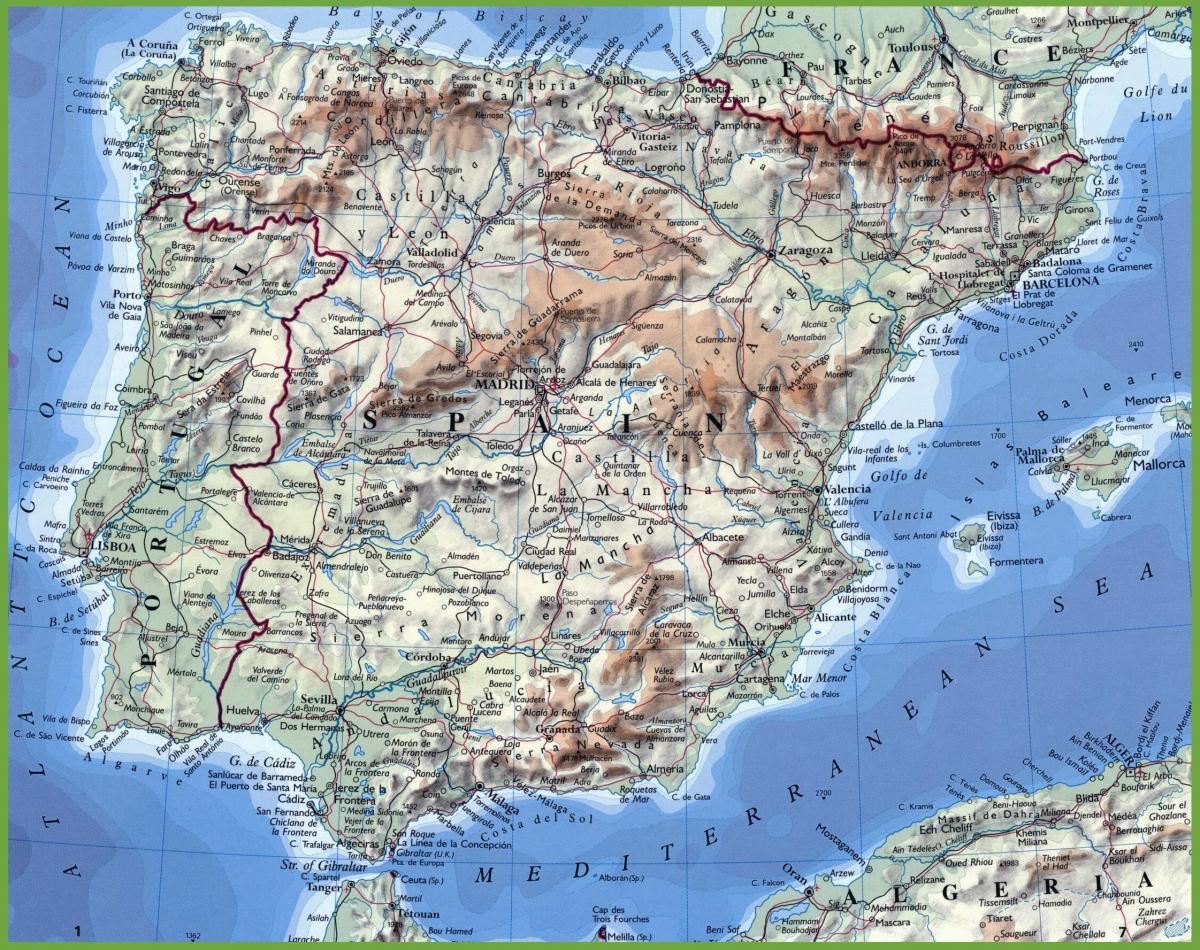 Mainland Spain is a mountainous country, dominated by high plateaus and mountain chains as its shown in Spain mountains map. After the Pyrenees, the main mountain ranges are the Cordillera Cantábrica, Sistema Ibérico, Sistema Central, Montes de Toledo, Sierra Morena and the Sistema Penibético whose highest peak, the 3,478 m high Mulhacén, located in Sierra Nevada, is the highest elevation in the Iberian peninsula, while the highest point in Spain is the Teide, a 3,718 m high active volcano in the Canary Islands. The Meseta Central is a vast plateau in the heart of peninsular Spain.

The Pyrenees mountain range, extends 435 km (270 mi) from the Mediterranean to the Bay of Biscay as its mentioned in Spain mountains map. In the extreme south of Spain lie the Straits of Gibraltar, which separate Spain and the rest of Europe from Ceuta and Morocco in north Africa; at its narrowest extent. The Meseta Central ("Inner Plateau") is a vast plateau in the heart of peninsular Spain, has elevations that range from 610 to 760 m. Rimmed by mountains, the Meseta Central slopes gently to the west and to the series of rivers that form some of the border with Portugal.

The massif of the Sierra Morena extends northward to the Río Guadiana, which separates it from the Sistema Central. Despite their relatively low elevations, seldom surpassing 1,300 m, the mountains of the Sierra Morena are rugged as you can see in Spain mountains map. The Cordillera Cantábrica, a limestone formation, runs parallel to, and close to, the northern coast near the Bay of Biscay. The Sistema Ibérico extends from the Cordillera Cantábrica southeastward and, close to the Mediterranean, spreads out from the Río Ebro to the Río Júcar. 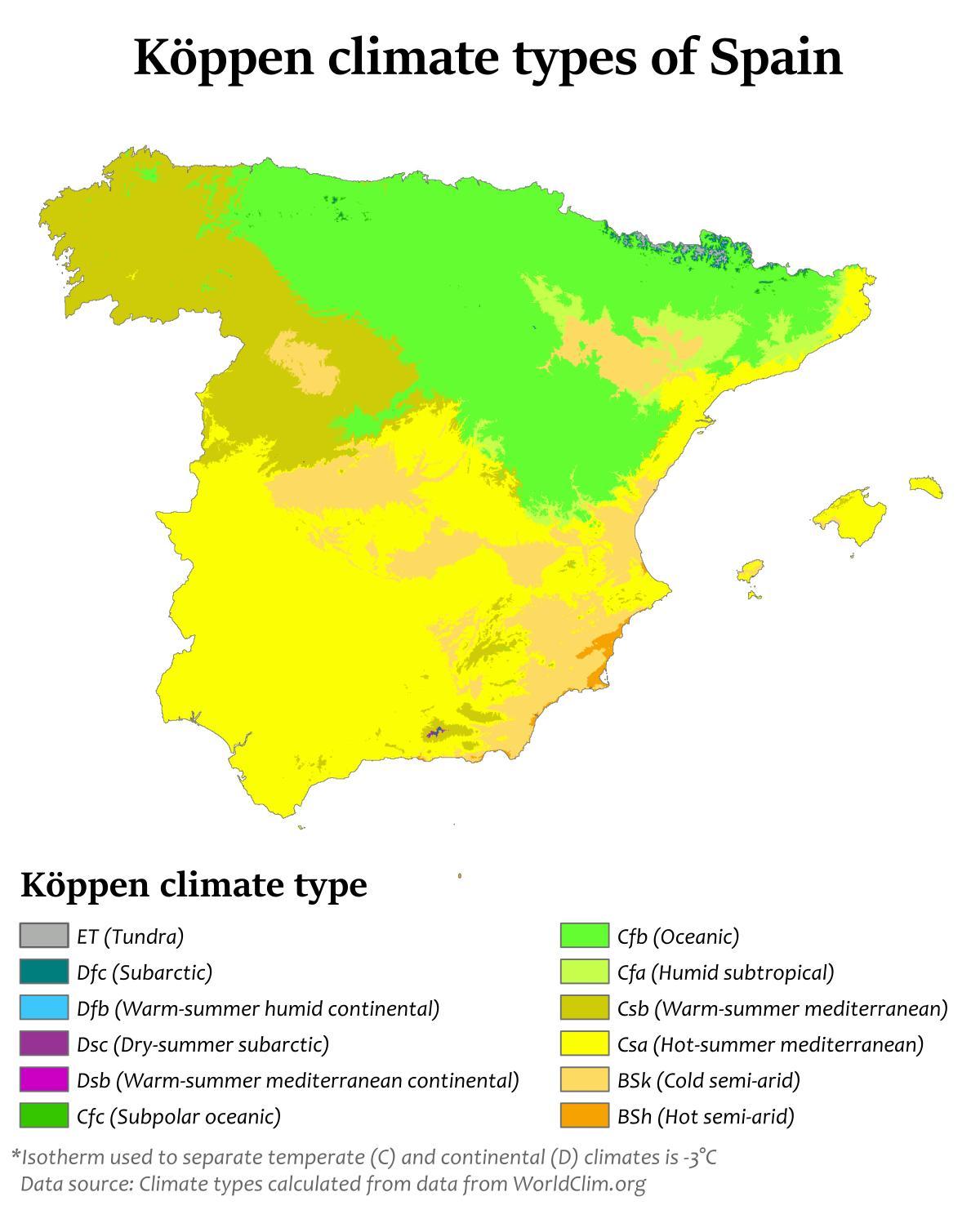 The Mediterranean climate of Spain, characterized by dry and warm summers. According to the Köppen climate classification, it is dominant in the peninsula, with two varieties: Csa and Csb as its shown in Spain climate map. The Köppen-Geiger classification (Csb), extends to additional areas not typically associated with a typical Mediterranean climate, with a climate more extreme, hot in summer and cold in winter, such as much of central and northern-central of Spain (Ex. Madrid, Burgos, Leon).

The semiarid climate (Bsh, Bsk), located in the southeastern quarter of the country of Spain, especially in the region of Murcia and in the Ebro valley as its mentioned in Spain climate map. In contrast with the Mediterranean climate, the dry season extends beyond the summer. Apart from the main climate types of Spain, other sub-types can be found, like the alpine climate in the Pyrenees and Sierra Nevada, and a typical subtropical climate in the Canary Islands.

One of the three main climatic zones of Spain (they can be separated, according to geographical situation and orographic conditions) is the oceanic climate (Cfb), located in north quarter of the country f Spain, especially in the region of Basque Country, Asturias, Cantabria and partly Galicia as you can see in Spain climate map. In contrary to the Mediterranean climate, winter and summer temperatures are influenced by the ocean, and have no seasonal drought.